A wintry sunset.
This post is part of the Skywatch Friday meme 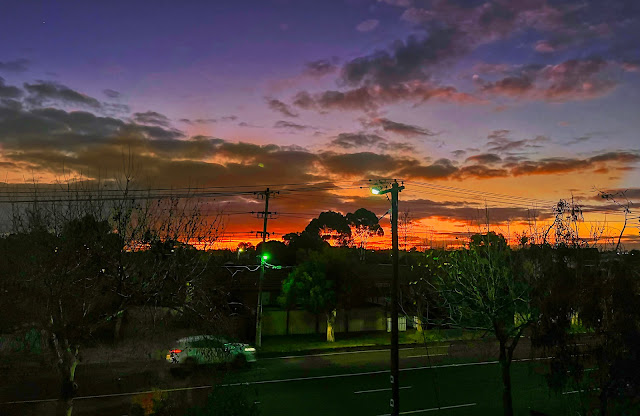 It's Winter here in Melbourne and the temperature this morning in our garden was 4˚C. All of our rose bushes are bare and pruned, except one, which is persisting to keep its leaves and I was keeping an eye on a bud growing. As it rained and was cold the previous couple of days, I forgot about it. This morning, I saw this rose which had opened. It's a 'Mr Lincoln' dark burgundy rose with a delightful fragrance. As well as that there was a garnet red carnation blooming, this too very fragrant. Odd, but they had to come indoors to enjoy a little of the heat and be admired!
This post is part of the Floral Friday Fotos meme 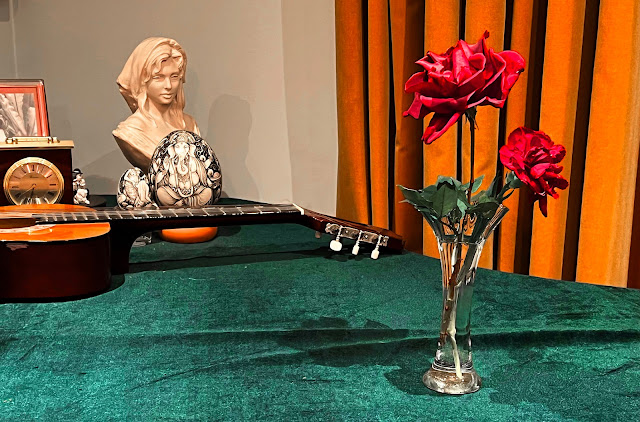 Posted by Melbourne Australia Photos at 18:39 No comments: 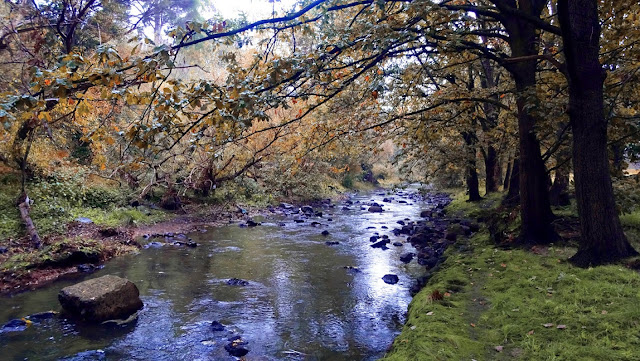 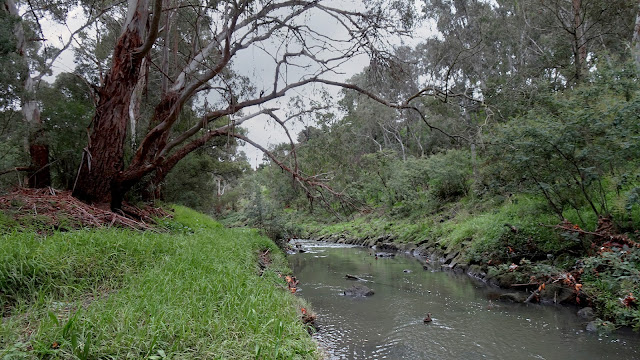 Posted by Melbourne Australia Photos at 18:08 No comments:

Brunswick Street is a street in inner northern Melbourne, known for cafés, live music venues, quirky shops, street entertainment and alternative fashion boutiques. It is a melting pot of culture, arts, music, alternative lifestyles, fun and trend-setting. No visit to Melbourne would be complete without a visit here.

Brunswick Street runs north-south through the inner northern Melbourne suburbs of Fitzroy and Fitzroy North, from Victoria Parade at its southernmost end, crossing Alexandra Parade, and continuing until it reaches St Georges Road in Fitzroy North, near the Edinburgh Gardens; there, its former northward course is continued by a much smaller residential street named Brunswick Street North. Tram route 112 runs along the entire length of Brunswick Street for part of its journey. 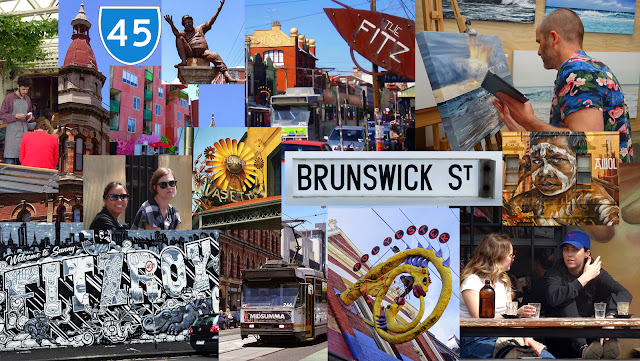 The lit-up city looks great on a long Winter's night.
This post is part of the Weekend Reflections meme,
and also part of the My Sunday Best meme. 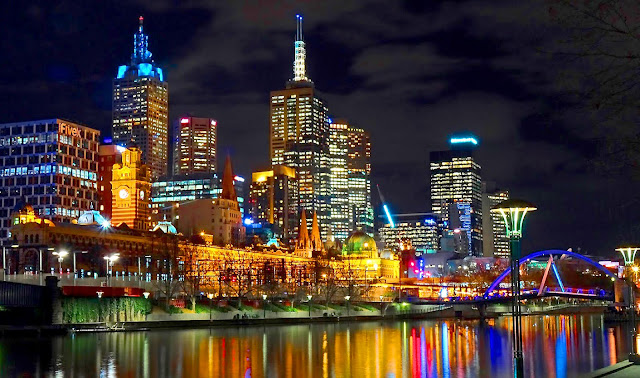 Posted by Melbourne Australia Photos at 18:13 No comments:

This post is part of the Weekend Reflections meme,
and also part of the Saturday Critters meme 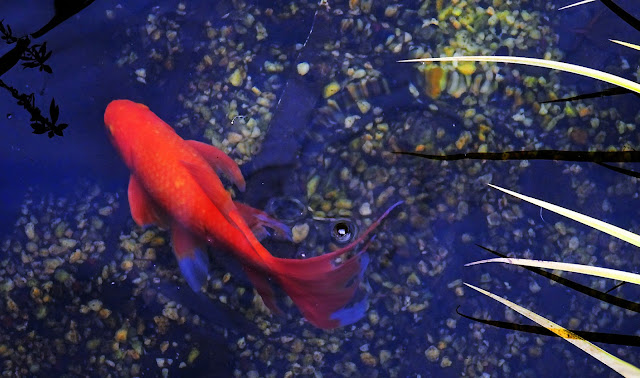 This is taken on the Princes Bridge, looking towards the Northeast, towards the Central Business District. I really like the old street lamps on this bridge and I always try and get them into the photos I take on the bridge.
This post is part of the Skywatch Friday meme 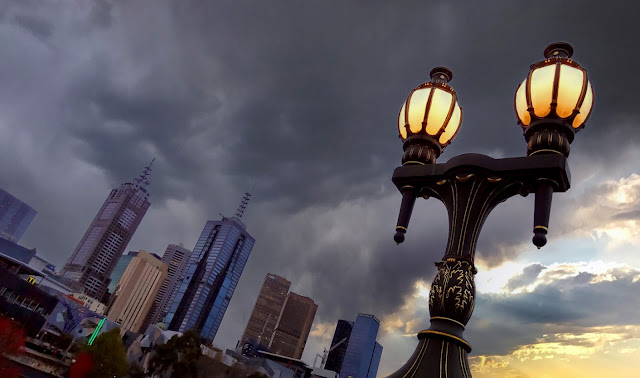 Viola odorata is a species of the genus Viola native to Europe and Asia, but has also been introduced to North America and Australia. It is commonly known as wood violet, sweet violet, English violet, common violet, florist's violet, or garden violet.
The sweet scent of this flower has proved popular throughout the generations particularly in the late Victorian period, and has consequently been used in the production of many cosmetic fragrances and perfumes. The scent of violet flowers is distinctive with only a few other flowers having a remotely similar odour. References to violets and the desirable nature of the fragrance go back to classical sources such as Pliny and Horace when the name ‘Ion’ was in use to describe this flower from which the name of the distinctive chemical constituents of the flower, the ionones – is derived.
The leaves are edible and contain mucilage. This year our violets are blooming early (in mid-June, our first Winter month), which certainly provides opportunity for collecting a cheerful little fragrant bouquet.
This post is part of the Floral Friday Fotos meme 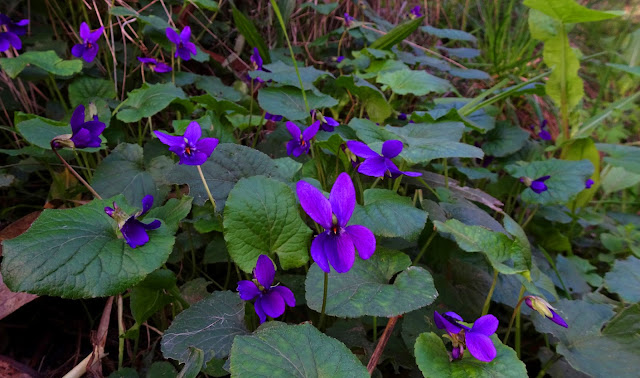 Posted by Melbourne Australia Photos at 18:43 No comments: 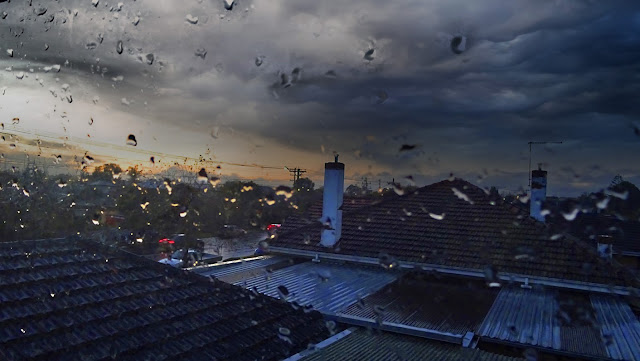