Xerophilous | zɪəˈrɒfɪləs, zɛˈrɒfɪləs | adjective Botany & Zoology
(of a plant or animal) adapted to a very dry climate or habitat, or to conditions where moisture is scarce.
ETYMOLOGY
from Greek, xēros, meaning 'dry', and philos, meaning 'loving'
DERIVATIVES
xerophile | ˈzɪərə(ʊ)fʌɪl | noun


The wooded area of Australia contains a large number of xerophilous trees and woody shrubs which thrive in regions receiving less than 25 cm of rain per annum. Country devoid of tree growth is rare, the conditions being due to lack of suitable soil rather than lack of rainfall. Sand dunes, rock exposures, and clay pans are the most common treeless areas.

The Darebin Parklands are in a typical dry sclerophyll (Greek: 'tough' + 'leaf') habitat. Dry Sclerophyll Forest (DrySF) is found on a range of clay-loam, sandy-loam and shallow rocky soils of exposed hillsides, mostly between 200 and 1000 m above sea level, with rainfall between 550 and 1000 mm a year. About half of the area once supporting DrySF in Victoria falls on public land while a little over one fifth is represented in conservation parks and reserves. About 45% of all DrySF has been permanently cleared for agriculture or urban development. In a dry sclerophyll forest, xerophilous species abound. Such habitats can withstand long periods of drought successfully, with regeneration when rain falls. 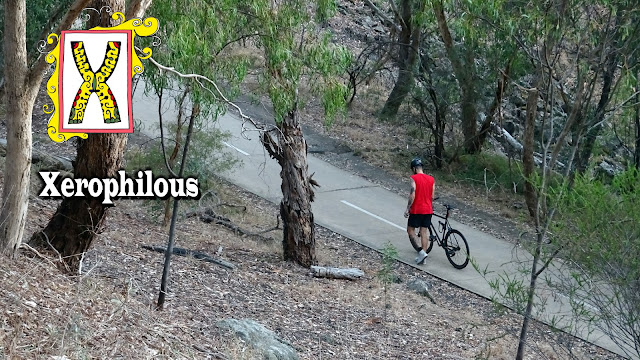 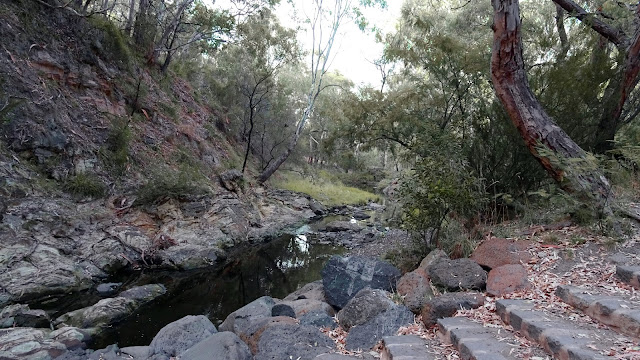 Posted by Melbourne Australia Photos at 18:52