GOG AND MAGOG IN ROYAL ARCADE

In Melbourne's Royal Arcade a focal point is the clock flanked by the giants Gog and Magog. These two 7-feet giants have been striking the time on Gaunt's clock since 1842. They were carved from clear pine and modelled on the figures erected in Guildhall, London, in 1708 to symbolise the conflict between the ancient Britons and the Trojan invaders. Mythology tells of the giants Gog and Magog (also known as Corineus and Gogmagog) having been captured in battle by the Trojans and made to serve as porters at the gateway of an ancient palace on a site later occupied by the Guildhall. It is traditional for Gog to stand to the north and Magog to the south.

Gog and Magog (Hebrew: גּוֹג וּמָגוֹג‎‎ Gog u-Magog; Arabic: يَأْجُوج وَمَأْجُوج‎ Yaʾǧūǧ wa-Maʾǧūǧ) are names that appear primarily in various Jewish, Christian and Muslim scriptures, as well as numerous subsequent references in other works. Their context can be either genealogical (as Magog in Genesis 10:2) or eschatological and apocalyptic, as in Ezekiel and Revelation. They are sometimes individuals, sometimes peoples, and sometimes geographic regions. The passages from Ezekiel and Revelation in particular have attracted attention due to their prophetic descriptions of conflicts said to occur near the "End times".

This post is part of the Mellow Yellow Monday meme. The yellow walls of Royal Arcade contribute to its bright, airy feel. 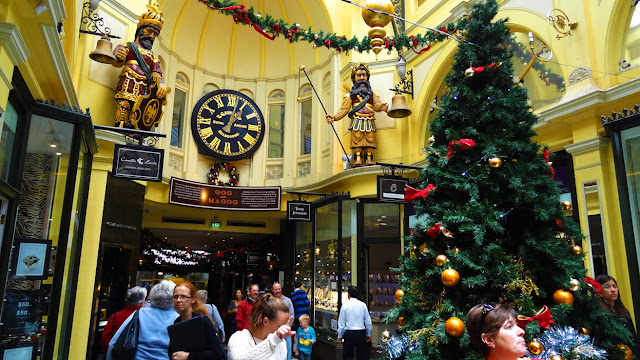 Posted by Melbourne Australia Photos at 03:49