CHRISTMAS IN THE BLOCK ARCADE

Block Arcade is a heritage shopping arcade experience in the centre of Melbourne but going back a hundred years it was the "place to be seen".  The arcade which was erected between 1891 and 1893 was designed by architect David C. Askew whose brief was to produce something similar to the Galleria Vittoria in Milan. The result was one of Melbourne's most richly decorated interior spaces, replete with mosaic tiled flooring, glass canopy, wrought iron and carved stone finishings. The exterior façade of the six storey office has near identical facades on Collins and Elizabeth Streets and is one of Australia's best surviving examples of the Victorian Mannerist style.  The arcade was formerly known as "Carpenter's Lane", however the precinct was widely known as "The Block". Once the works were complete, local shopkeepers successfully petitioned to have it changed to its present name.

Christmas in the Block Arcade is quite special with decorations up and shops offering an exquisite variety of gifts for sale. The gift wrapping service makes it just so easy to get all of your Christmas gift shopping and wrapping done all at once.

This post is part of the Signs, Signs meme. 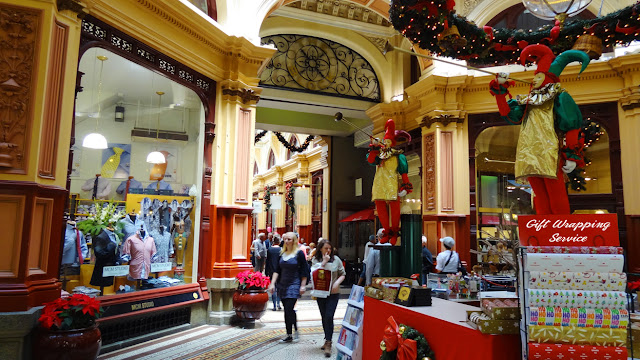 Posted by Melbourne Australia Photos at 04:21