Coburg is a suburb in Melbourne, Victoria, Australia, 8 km north from Melbourne's central business district. Its Local Government Area is the City of Moreland, although a handful of properties on Coburg's Eastern boundary are located in the City of Darebin. At the 2006 Census, Coburg had a population of 23,772. Coburg was surveyed by Robert Hoddle in 1837–38 and he recorded details of the first white person living in Coburg. It was a Mr Hyatt who had a sheep station and hut on the east bank of the Merri Creek near present Outlook Road.

The Railway Station is a fine old Victorian red brick building typical of the period, that has been well-preserved. It is still used and presently, with Coburg Station classed as a Premium Station, being in Metcard Zone 1. The large red brick building houses an enclosed waiting area, ticketing facilities and toilets.

This post is part of the "Our World Tuesday" meme. 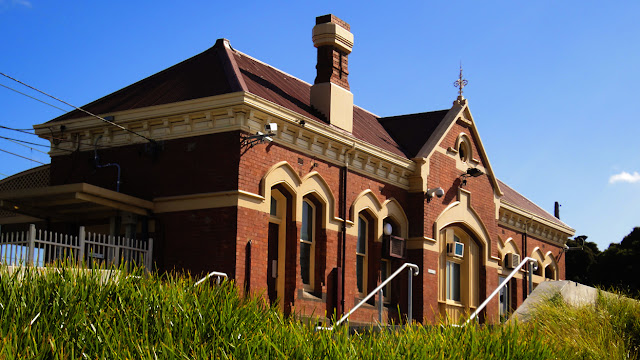 Posted by Melbourne Australia Photos at 01:35