With the shops decked out in all of their festive finery, carols blaring away from the muzak, huge numbers of people milling in the big shopping centres, it's always relaxing at this time of the year to go and shop in a nursery to buy some living Christmas gifts like these gorgeous Poinsettias (Euphorbia pulcherrima).  It is plant indigenous to Mexico and Central America. Its common name is after Joel Roberts Poinsett, the first United States Minister to Mexico, who introduced the plant into the US in 1825. It is also called the Atatürk flower in Turkey.

The plant's association with Christmas began in 16th century Mexico, where legend tells of a young girl who was too poor to provide a gift for the celebration of Jesus' birthday. The tale goes that the child was inspired by an angel to gather weeds from the roadside and place them in front of the church altar. Crimson "blossoms" sprouted from the weeds and became beautiful poinsettias. From the 17th century, Franciscan friars in Mexico included the plants in their Christmas celebrations. The star-shaped leaf pattern is said to symbolise the Star of Bethlehem, and the red color represents the blood sacrifice through the crucifixion of Jesus.  Poinsettias are popular Christmas decorations in homes, churches, offices, and elsewhere across North America. They are available in large numbers from a variety of stores. In the United States, December 12 is National Poinsettia Day. 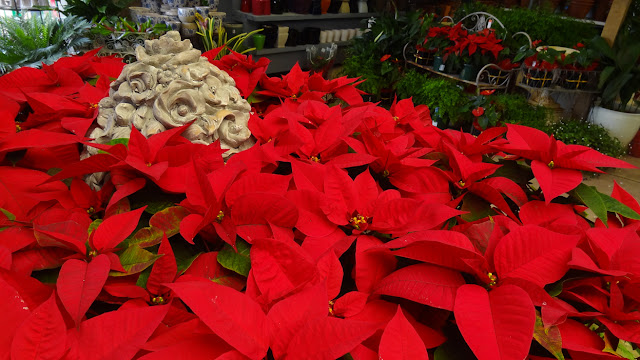 Posted by Melbourne Australia Photos at 04:43