In Australia, Melbourne University is the second largest research organisation after the CSIRO. In 2010, it spent $767.5m on research and has consistently ranked first or second on the major national research indicators which are used by the Australian Government to allocate public funds for research and training infrastructure. The university has over 35,000 students, who are supported by just over 7,300 staff members. In 2008, it introduced the controversial "Melbourne Model", a combination of various practices from American and European universities, aimed at consistency with the European Union's "Bologna process" and international relevance and standing for its degrees. Glyn Davis AC is Melbourne's current vice-chancellor.

The University is ever-expanding as this series of relatively new buildings shows, mushrooming as they are from the preserved Victorian Terrace heritage buildings. As this is my Alma Mater, I maintain links with it and it is always a pleasure to go and visit, seeing that some things at east reamin the same there...

This post is part of the "Signs, Signs" meme. 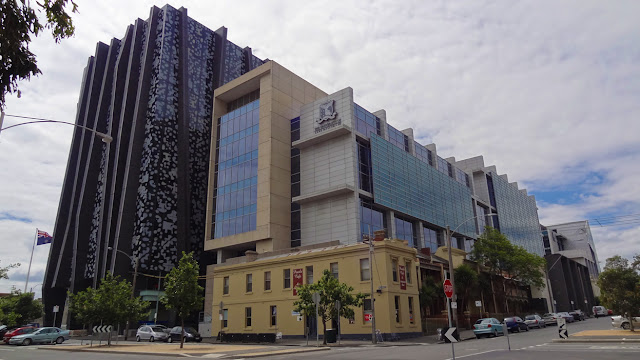 Posted by Melbourne Australia Photos at 02:51