One firefighter has died and multiple properties were lost after terrifying bushfires driven by extreme weather conditions swept across four Australian states today. The volunteer firefighter from the New South Wales Rural Fire Service died when a truck rolled near Albury, on the border with Victoria. Two trucks, including the one in which the firefighter died, were overturned by high winds. Two other firefighters suffered burns in the crash. Ten people have now died during one of the worst bushfire seasons in the nation’s history, which have burned through more than 4.6m hectares.

Temperatures reached above 40˚C in all states, including Tasmania, where Hobart recorded 40.8˚C, its hottest December day ever. Several properties were reportedly lost in fires near Fingal in the north of the island state. This evening, 16 emergency-level fires were burning in Victoria, Tasmania and New South Wales. In South Australia, conditions had been rated catastrophic across much of the state, but it survived the day without feared extensive property losses. Firefighters were bracing for further strong winds, in some places forecast to reach up to 120km an hour, and dry lightning strikes, which are feared to be ruinous after a day of sweltering heat.

About 12 km north of our home, in Bundoora and Mill Park, houses both sides of the Plenty Gorge parklands were threatened by an out-of-control fire that sent burning embers into backyards. At least three homes were damaged and two people were assessed by paramedics in the afternoon.

In our garden today extremely high temperatures (it was 43˚C in the shade) and searing high winds wrought havoc in our garden beds and plants. Roses were shrivelled up as though placed in oven, shadecloths were torn asunder and flew away, many plants were uprooted and a couple of statues fell over from their bases (fortunately they were not damaged). But all of these were minor issues compared to lives and whole properties lost elsewhere in our state.

A cool change came in later this evening and tomorrow's maximum is promised to be just 21˚C with rain. We're counting our blessings and remembering the bravery, self-sacrifice and tirelessness of our firefighters who do battle with massive fires each day. 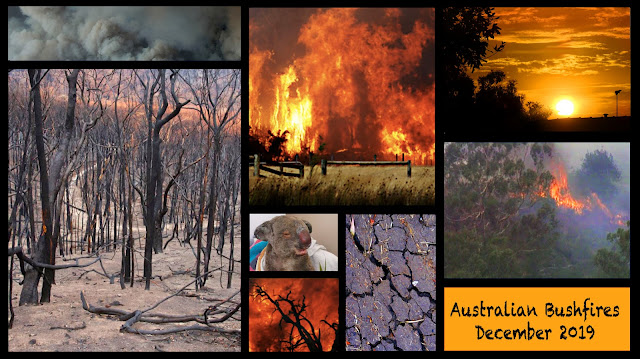 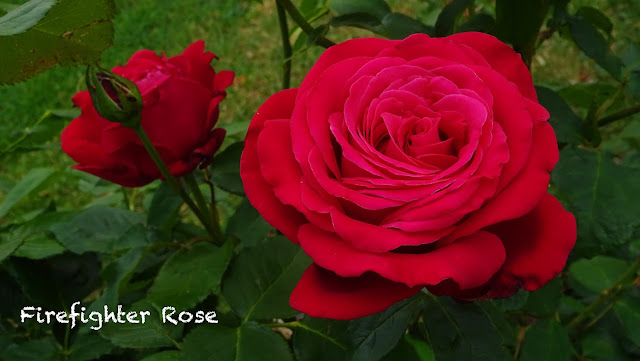 The name of this rose, 'Firefighter' honours the work our firefighters do here in Australia and as it states on the plant label: “This rose is so named as to remember those men and women who risk their lives daily to protect ours”.

Posted by Melbourne Australia Photos at 18:55