Hoverflies, sometimes called flower flies, or syrphid flies, make up the insect family Syrphidae. As their common name suggests, they are often seen hovering or nectaring at flowers; the adults of many species feed mainly on nectar and pollen, while the larvae (maggots) eat a wide range of foods. In some species, the larvae are saprotrophs, eating decaying plant and animal matter in the soil or in ponds and streams.
About 6,000 species in 200 genera have been described. Hoverflies are common throughout the world and can be found on all continents except Antarctica. Hoverflies are harmless to most other animals, despite their mimicry of more dangerous wasps and bees, which wards off predators.
Hieracium known by the common name hawkweed and classically as hierakion (from ancient Greek ιεράξ, hierax 'hawk'), is a genus of the sunflower family Asteraceae, and closely related to dandelion (Taraxacum), chicory (Cichorium), prickly lettuce (Lactuca) and sow thistle (Sonchus), which are part of the tribe Cichorieae. Hawkweeds, with their 10,000+ recorded species and subspecies, do their part to make Asteraceae the second largest family of flowers.
This post is part of the Saturday Critters meme 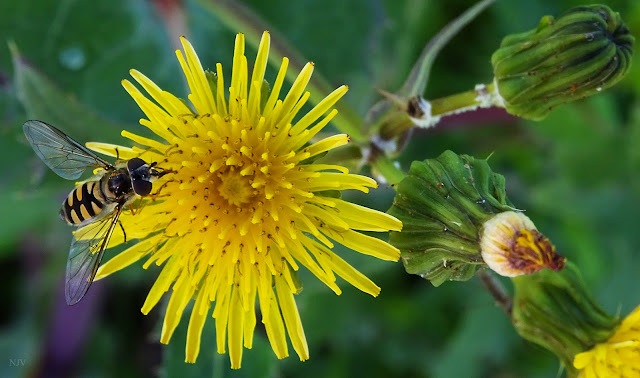 Posted by Melbourne Australia Photos at 17:20