Clivia is a genus of monocot flowering plants native to southern Africa. They are from the family Amaryllidaceae, subfamily Amaryllidoideae. Common names are Natal lily or bush lily. They are herbaceous evergreen plants, with green, strap-like leaves. Individual flowers are more or less bell-shaped, occurring in umbels on a stalk above the foliage; colours typically range from yellow through orange to red. Many cultivars exist, some with variegated leaf patterns.
Species of Clivia are found only in South Africa and Swaziland. They are typically forest undergrowth plants, adapted to low light (with the exception of C. mirabilis from the Western Cape). Clivia miniata grows into large clumps and is surprisingly water wise. It is also reportedly naturalised in Mexico. It is a popular plant for shady areas and is commonly seen growing in older established suburbs in most Australian states.
It is also popular in New Zealand, Japan, China and southern parts of the USA , particularly California. It grows to a height of about 45 cm, and various varieties have flowers that are red, orange or yellow, sometimes with a faint, but very sweet perfume.
This post is part of the Floral Friday Fotos meme 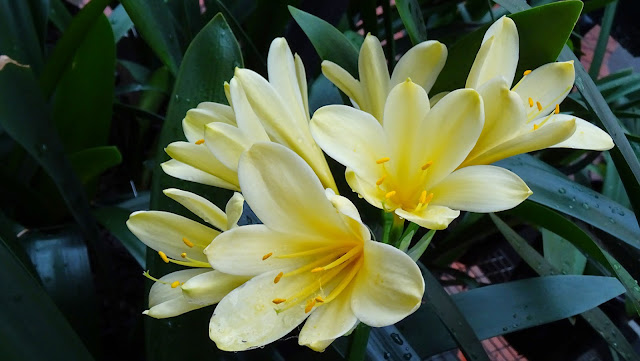 Posted by Melbourne Australia Photos at 17:17