Since the Spotted Dove (Streptopelia chinensis) was introduced into Australia from Asia in the 1860s, they have been very successful, expanding their range greatly to occur right along the east coast, as well as in parts of South Australia and Western Australia.
The Spotted Dove builds its nest from a few fine twigs. It is so frail that the eggs are often visible from below, and they often fall out. Being so precarious, it seems the eggs must seldom hatch successfully and nestlings seldom survive to fledge, but this is not so.
Spotted Doves are mostly light brown above, with darker centres to the feathers of the back and wings. The head is grey, and the neck and underparts are grey-brown, tinged with pink. In flight the white-tipped tail is clearly seen. The distinguishing feature is the large black collar on the base of the hind-neck, which has many white spots. Sexes are similar in plumage. Young Spotted Doves are similar to adults, but have a mostly dark grey collar instead of black and white.
This post is part of the Saturday Critters meme. 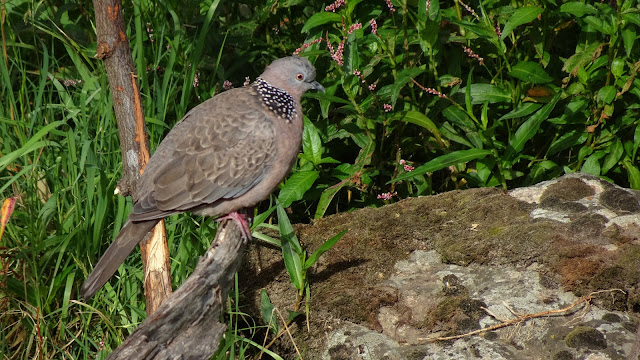 Posted by Melbourne Australia Photos at 17:27