Protea is both the botanical name and the English common name of a genus of South African flowering plants, also called sugarbushes (Afrikaans: suikerbos), in the family Proteaceae.

The family Proteaceae to which Protea species belong is an ancient one among angiosperms. Evidence from pollen fossils suggests Proteaceae ancestors grew in Gondwana, in the Upper Cretaceous, 75–80 million years ago. The Proteaceae are divided into two subfamilies: the Proteoideae, best represented in southern Africa, and the Grevilleoideae, concentrated in Australia and South America and the other smaller segments of Gondwana that are now part of eastern Asia. Africa shares only one genus with Madagascar, whereas South America and Australia share many common genera – this indicates they separated from Africa before they separated from each other.

Proteas are a great plant to grow in the garden or pot. Their flowers are well sought after and come in a range of colours from deep pinks, pinky orange, lime and whites, which are long lasting when cut. Great for the easy care gardener as well, as they require little water once established. 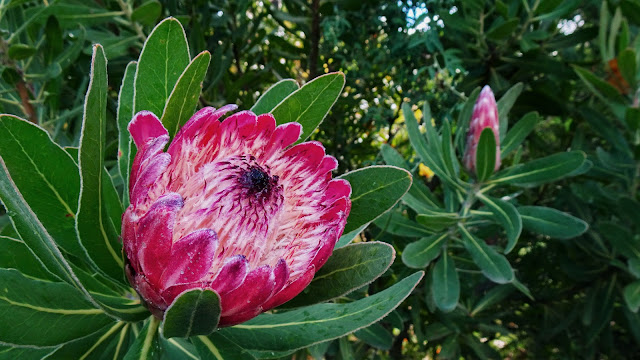 Posted by Melbourne Australia Photos at 18:56