The Melbourne Cup is the horse race of all Australian horse races. Every year when this race is run around 3:00 pm, it literally stops the entire nation. Melbourne Cup Day is fixed on the first Tuesday in November and although it is a public holiday only in the Melbourne Metropolitan area, Australians all over the nation are glued to their television screens or listen on the radio (or on the internet too, nowadays, I suppose) to watch this historic race.
The race is held over a distance of 3,200 meters, the traditional two-mile cup distance, for horses three years and older and is the richest and most prestigious “two-mile” handicap in the world. It is held in Flemington Racecourse, located in Flemington, one of Melbourne's inner city suburbs, which is named after a butcher who lived there in the 19th century. I certainly hope he didn't sell horse meat - that would be grand irony!
The first Melbourne Cup was run in 1861. There were 17 starters and the prize was 170 pounds and a hand-beaten gold watch (this was the trophy given before the traditional Loving Cup which the Melbourne Cup is known for). “Archer”, the first Cup-winning horse, had been walked to Melbourne from its stable in Nowra, New South Wales, a distance of about 800km. “Archer” won again the following year to a prize of 810 gold sovereigns (£810) and a gold watch. “Archer” went on to win the race the following year once more, making him one of the five horses to win the event more than once.
Champion mare Verry Elleegant has taken out the G1 Melbourne Cup in sensational fashion, romping home to defeat boom horse Incentivise by 4L. Verry Elleegant, ridden by James McDonald, settled in a midfield position before entering the Flemington straight under a hold out wide.
After the pandemic essentially stopped Melbourne for more than 18 months, Victoria's COVID-19 restrictions eased just in time for the race that stops the nation. About 70 per cent of spectators at Flemington were Victoria Racing Club (VRC) members, with only 5 per cent of tickets offered to the public — equating to a few hundred ticketholders. The rest of the crowd was made up of horse owners, corporate sponsors and trainers.
This post is part of the Our World Tuesday meme,
and also part of the Ruby Tuesday meme,
and also part of the Travel Tuesday meme,
and also part of the Wordless Wednesday meme. 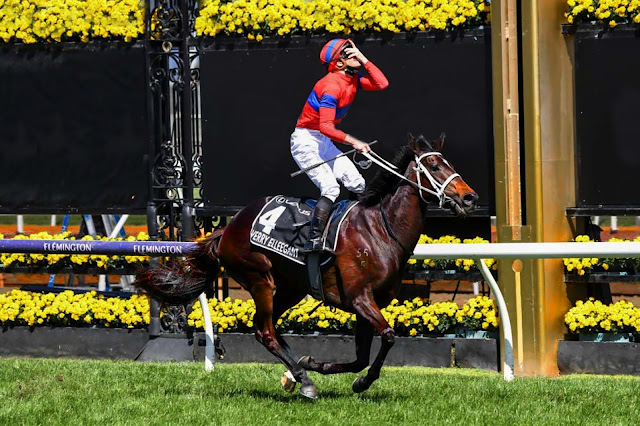 Posted by Melbourne Australia Photos at 17:34