Leonotis leonurus, also known as lion's tail and wild dagga, is a plant species in the mint family, Lamiaceae. The plant is a broadleaf evergreen large shrub native to South Africa and southern Africa, where it is very common.
It is known for its medicinal properties. The main psychoactive component of Leonotis leonurus is claimed to be leonurine, even though leonurine has never been found in the plant using chemical analysis. Like other plants in the mint family, it also contains marrubiin.
The name 'wild dagga' links it closely to cannabis as 'dagga' derived from the Khoikhoi 'dachab' is an indigenous South African name for cannabis species. This name may be a misnomer, as no part of the plant is used as a hallucinogen.
This post is part of the Floral Friday Fotos meme 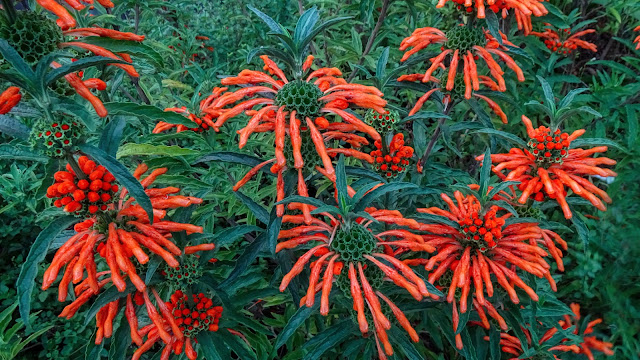 Posted by Melbourne Australia Photos at 17:12