Callistemon is a genus of shrubs in the family Myrtaceae, first described as a genus in 1814. The entire genus is endemic to Australia but widely cultivated in many other regions and naturalised in scattered locations. Their status as a separate taxon is in doubt, some authorities accepting that the difference between callistemons and melaleucas is not sufficient for them to be grouped in a separate genus.
Callistemon species have commonly been referred to as bottlebrushes because of their cylindrical, brush like flowers resembling a traditional bottle brush. They are mostly found in the more temperate regions of Australia, especially along the east coast and typically favour moist conditions so when planted in gardens thrive on regular watering. However, two species are found in Tasmania and several others in the south-west of Western Australia. At least some species are drought-resistant and some are used in ornamental landscaping elsewhere in the world.
This post is part of the Floral Friday Fotos meme 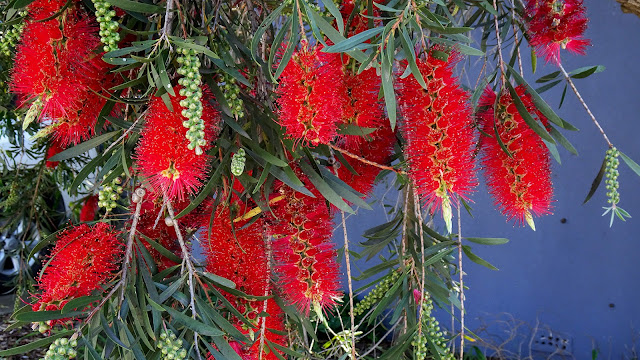 Posted by Melbourne Australia Photos at 16:57