Arisarum vulgare, common name Cobra Plant, Friar's Cowl or Larus, is a herbaceous, perennial, with an underground rhizome plant in the genus Arisarum belonging to the family Araceae. Arisarum vulgare reaches an average height of 10–30 cm.
The leaves of this geophyte plant are basal only, wide, ovate to arrow-shaped, with a petiole 12–15 cm long. The stems are erect and unbranched, usually mottled and grow directly from the underground rhizome. A single leaflike bract (spathe) forms a purplish-brown or olive green striped tube about 15 cm long, with an open upper part helmet or hood-shaped curved forward. It encloses a fleshy greenish club-like spike (spadix) bent forward, protruding from the tube and bearing at the bottom minute purple violet flowers. The 20 male flowers are located above the four to six female, with sterile flowers completely missing.
The flowering period extends from Autumn to Spring. The sexes are united in the same individual plant. Pollination is granted by insects (entomophily). The fruits are greenish berries of about 1 centimetre long. This plant native to Mediterranean region of southern Europe and northern Africa, east to the Caucasus, and west to the Canary Islands, the Azores and Madeira.
Arisarum vulgare prefers grassy fields and rocky scrubland, forests and wasteland, mainly in shady and cool places and in moist soils, at an altitude of 0–800 metres above sea level. Grow this cautiously in the garden as it can become quite invasive.
This post is part of the Floral Friday Fotos meme 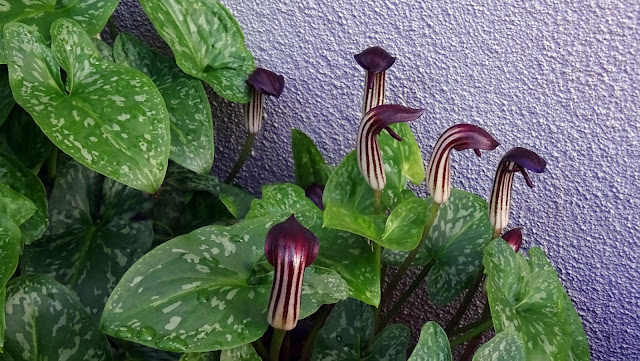