Male Eastern Water Dragon, (Intellagama lesueurii). Australian water dragons have long powerful limbs and claws for climbing, a long muscular laterally-compressed tail for swimming, and prominent nuchal and vertebral crests (a nuchal crest is a central row of spikes at the base of the head). These spikes continue down the spine, getting smaller as they reach the base of the tail.
Including their tails, which comprise about two-thirds of their total length, adult females grow to about 60 cm long, and adult males can grow slightly longer than one metre and weigh about 1 kg. Males show bolder colouration and have larger heads than females. Colour is less distinct in juveniles.
Australian water dragons are extremely shy in the wild, but readily adapt to continual human presence in suburban parks and gardens. They are fast runners and strong climbers. When faced with a potential predator, they seek cover in thick vegetation, or drop from an overhanging branch into water. They are able to swim totally submerged, and rest on the bottom of shallow creeks or lakes for up to 90 minutes, to avoid detection.
Both males and females display typical agamid behaviour such as basking, arm-waving and head-bobbing. Fast arm-waving signals dominance, while slow arm-waving signals submission. Males are territorial, and in areas of higher population density, males exhibit displays of aggression toward other males including posturing, chasing and fighting.
This post is part of the Saturday Critters meme 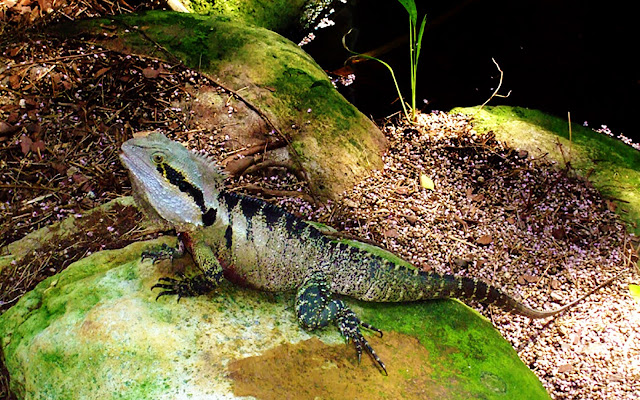