Gippsland is a rural region that makes up the southeastern part of Victoria, Australia, mostly comprising the coastal plains to the rainward (southern) side of the Victorian Alps (the southernmost section of the Great Dividing Range). It covers an elongated area of 41,556 km2 located further east of the Shire of Cardinia (Melbourne's outermost southeastern suburbs) between Dandenong Ranges and Mornington Peninsula, and is bounded to the north by the mountain ranges and plateaus/highlands of the High Country (which separate it from Hume region in Victoria's northeast), to the southwest by the Western Port Bay, to the south and east by the Bass Strait and the Tasman Sea, and to the east and northeast by the Black-Allan Line (the easternmost section of the Victoria/New South Wales state border).
The Gippsland region is generally divided by the Strzelecki Ranges and tributaries of the Gippsland Lakes into five statistical sub-regions — namely the West Gippsland, South Gippsland, Latrobe Valley, Central Gippsland and East Gippsland. As at the 2016 Australian census, Gippsland had a population of 271,266, with the principal population centres of the region, in descending order of population, Traralgon, Warragul, Drouin, Bairnsdale, Moe, Sale, Morwell, Wonthaggi, Leongatha, and Phillip Island. Gippsland is best known for its primary production such as mining, power generation and farming as well as its tourist destinations — Phillip Island, Wilsons Promontory, the Gippsland Lakes, Walhalla, the Baw Baw Plateau, and the Strzelecki Ranges.
It is a convenient region close to Melbourne for a day-trip, but not only. There are many attractive spots to see and many wonderful small towns to see and spots of  historical interest to visit.
This post is part of the Travel Tuesday meme,
and also part of the Blue Monday meme. 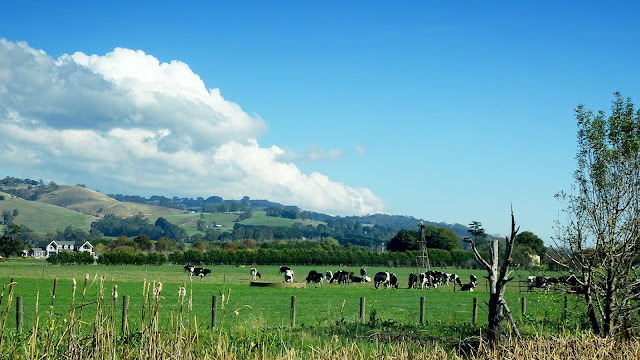