Agapanthus is the only genus in the subfamily Agapanthoideae of the flowering plant family Amaryllidaceae. The family is in the monocot order Asparagales. The name is derived from scientific Greek: αγάπη (agape) = love, άνθος (anthos) = flower. Some species of Agapanthus are commonly known as lily of the Nile (or African lily in the UK), although they are not lilies and all of the species are native to Southern Africa (South Africa, Lesotho, Swaziland, Mozambique) though some have become naturalised in scattered places around the world (Australia, Great Britain, Mexico, Ethiopia, Jamaica, etc.).

Species boundaries are not clear in the genus, and in spite of having been intensively studied, the number of species recognised by different authorities varies from 6 to 10. The type species for the genus is Agapanthus africanus shown here. A great many hybrids and cultivars have been produced and they are cultivated throughout warm areas of the world.

In Melbourne, these are planted widely in gardens, parks but also median strips of roads and nature strips. As they bloom around the time of Christmas, most Melburnians associate this flower with the Festive Season. 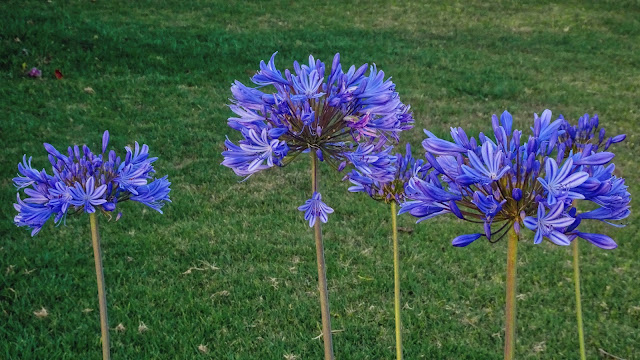 Posted by Melbourne Australia Photos at 17:18