This year, many people have been eagerly awaiting Monday (Dec. 21) to arrive for several reasons: For one, Monday was the last solstice of 2020. This means people in the Northern Hemisphere experienced the first day of winter, and the summer solstice arrived in the Southern Hemisphere. Second, the two largest planets of the solar system appeared in a rare "great conjunction" that same night, capturing the attention of people across the world.
Saturn and Jupiter are hundreds of millions of miles apart. However on Monday they formed a line through space with Earth, which caused the two gas giants to appear very close to one another in the evening sky shortly after sunset. Observatories and skywatching enthusiasts across the world have been keenly watching this conjunction because of its rarity. Saturn and Jupiter meet in Earth's sky about once every 20 years, and some years they appear closer to each other than in other years.
The two planets' proximity in the sky in 2020 hasn't happened in about 400 years, and it hasn't been visible in the evening sky (when the sunlight doesn't obstruct viewing) in about 800 years. So I thought I was quite lucky to observe this in my lifetime, on the night of December 20th, and even luckier to be able to capture a shot of it with my camera. That is the first image. The second is a screen capture from the excellent, free astronomy program "Stellarium" (download here: https://stellarium.en.softonic.com/mac/download ). It gives you a magnified view of thee two planets as well as some of their major moons.
In my photo, you can just make out two of Jupiter's moons, probably Ganymede and Callisto.
This post is part of the Skywatch Friday meme. 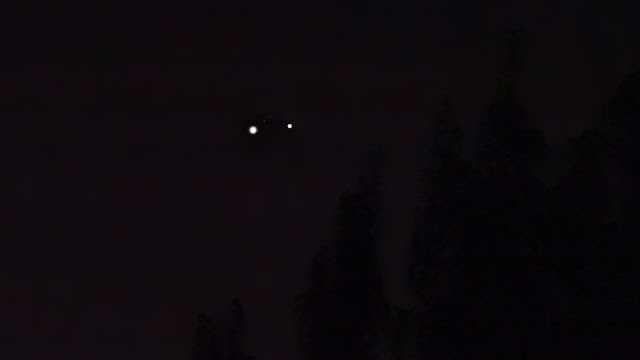 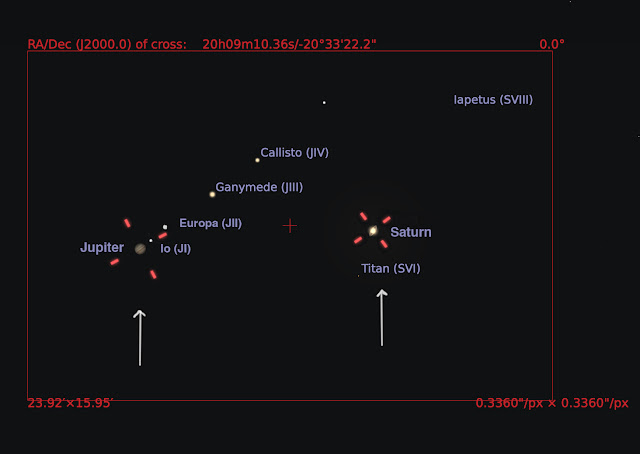 Posted by Melbourne Australia Photos at 18:20