At the end of Autumn, as we prepare to go into Winter, the leaves are still turning on the deciduous trees as you can see on the right on this Callery Pear. Meanwhile, at the same time, on the left a wattle tree is in full bloom with its cheery yellow flowers. Up to a third of Australia's 960 species of wattle will flower in winter. This winter blooming means that somewhere in Australia, no matter what time of year, a wattle is flowering, because they also flower in spring, summer and autumn!
Wattles growing nearest the coast are generally the earliest in the year to flower, followed by those further inland. Similarly, the tide of yellow sweeps from north to south, as the wattles in the northerly parts of Australia flower first, followed by the more southerly species.
The Acacia genus, which includes all the wattles, is the biggest group of trees and shrubs in Australia, topping even the eucalypts in diversity. They were part of the original Gondwana vegetation, which is why, today, acacias are also found in Africa, South America and India.
This post is part of the Floral Friday Fotos meme 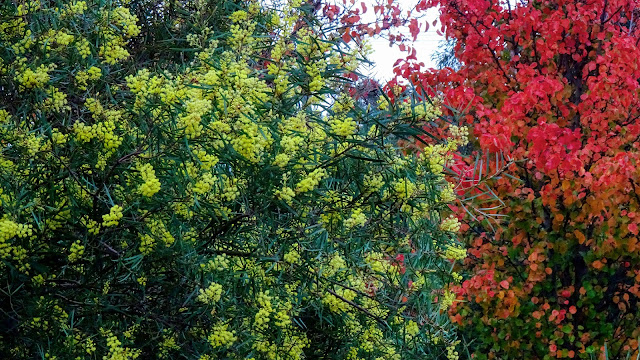 Posted by Melbourne Australia Photos at 18:07