Waratah (Telopea) is an Australian-endemic genus of five species of large shrubs or small trees, native to the southeastern parts of Australia (New South Wales, Victoria and Tasmania). The most well-known species in this genus is Telopea speciosissima, which has bright red flowers and is the NSW state emblem.
The waratah is a member of the plant family Proteaceae, a family of flowering plants distributed in the Southern Hemisphere. The key diagnostic feature of Proteaceae is the inflorescence, which is often very large, brightly coloured and showy, consisting of many small flowers densely packed into a compact head or spike. Species of waratah boast such inflorescences ranging from 6–15 cm in diameter with a basal ring of coloured bracts. The leaves are spirally arranged, 10–20 cm long and 2–3 cm broad with entire or serrated margins.
The name waratah comes from the Eora Aboriginal people, the original inhabitants of the Sydney area.
Chrysanthemums, sometimes called mums or chrysanths, are flowering plants of the genus Chrysanthemum in the family Asteraceae. They are native to Asia and northeastern Europe. Most species originate from East Asia and the centre of diversity is in China. There are countless horticultural varieties and cultivars. Shown here is a green spider chrysanthemum hybrid.
This post is part of the Floral Friday Fotos meme. 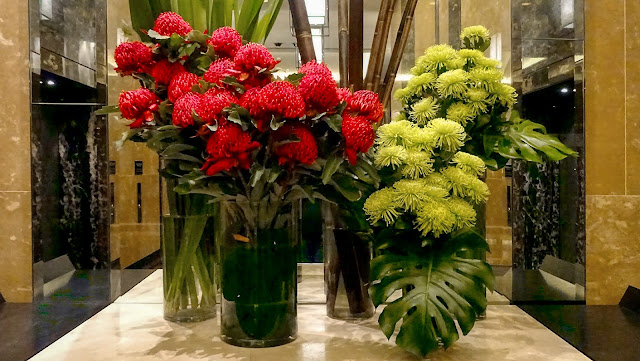 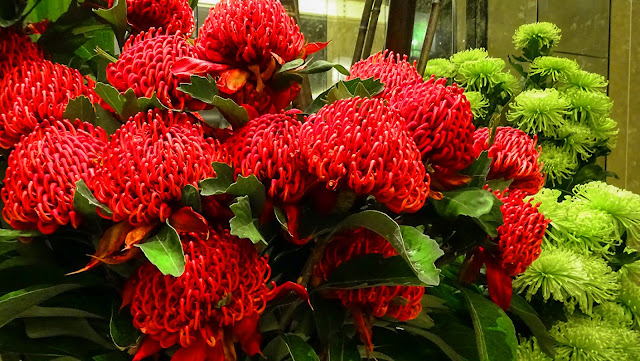 Posted by Melbourne Australia Photos at 18:25