The Yarra River or historically, the Yarra Yarra River, (Aboriginal: Birrarung, and Wongete) is a perennial river in east-central Victoria, Australia. The lower stretches of the river are where the city of Melbourne was established in 1835 and today Greater Melbourne dominates and influences the landscape of its lower reaches.

From its source in the Yarra Ranges, it flows 242 kilometres west through the Yarra Valley which opens out into plains as it winds its way through Greater Melbourne before emptying into Hobsons Bay in northernmost Port Phillip. The river was a major food source and meeting place for indigenous Australians from prehistoric times. The river is still a major habitat area for both local and introduced species of flora and fauna, as numerous nature reserves adjacent to the waterway exist throughout the metropolitan area.

Shortly after the arrival of European settlers land clearing forced the remaining Wurundjeri to neighbouring territories and away from the river. Originally called Birrarung by the Wurundjeri, the current name was mistranslated from another Wurundjeri term in the Boonwurrung language; Yarro-yarro, meaning "ever-flowing". 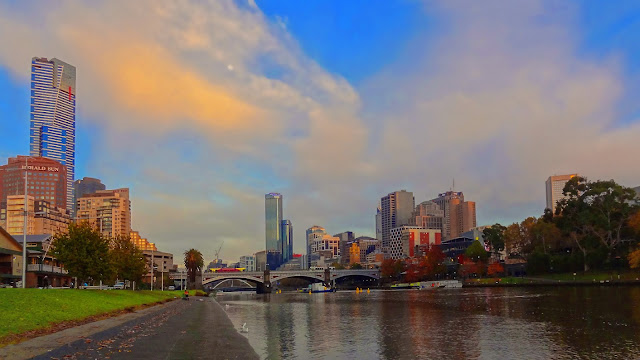 Posted by Melbourne Australia Photos at 17:13