Hippeastrum flowering in our garden. Hippeastrum is a genus in the family Amaryllidaceae. The name Hippeastrum, given to it by William Herbert, means "knight's star", although precisely what Herbert meant by the name is not certain. For many years there was confusion among botanists over the generic names Amaryllis and Hippeastrum, one result of which is that the common name amaryllis is mainly used for cultivars of this genus, often sold as indoor flowering bulbs particularly at Christmas in the northern hemisphere. By contrast the generic name Amaryllis applies to bulbs from South Africa, usually grown outdoors. The genus is native to tropical and subtropical regions of the Americas from Argentina north to Mexico and the Caribbean.
This post is part of the Floral Friday Fotos meme. 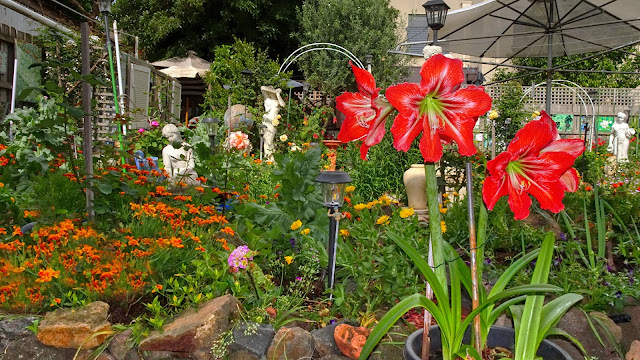 Posted by Melbourne Australia Photos at 17:25