Crataegus (from the Greek kratos "strength" and akis "sharp", referring to the thorns of some species) commonly called hawthorn, thornapple, May-tree, whitethorn, or hawberry, is a large genus of shrubs and trees in the family Rosaceae, native to temperate regions of the Northern Hemisphere in Europe, Asia and North America. The name "hawthorn" was originally applied to the species native to northern Europe, especially the common hawthorn C. monogyna, and the unmodified name is often so used in Britain and Ireland. The name is now also applied to the entire genus and to the related Asian genus Rhaphiolepis. The name haw, originally an Old English term for hedge, applies to the fruit.

The common hawthorn (Crataegus monogyna) is a shrub or small tree 5–14 metres tall, with a dense crown. The bark is dull brown with vertical orange cracks. The younger stems bear sharp thorns, approximately 12.5mm long. The leaves are 20 to 40mm long, obovate and deeply lobed, sometimes almost to the midrib, with the lobes spreading at a wide angle. The upper surface is dark green above and paler underneath. The hermaphrodite flowers are produced in late spring (May to early June in its native area) in corymbs of 5-25 together; each flower is about 10mm diameter, and has five white petals, numerous red stamens, and a single style; they are moderately fragrant. The flowers are pollinated by midges, bees and other insects and later in the year bear numerous haws.

The haw is a small, oval dark red fruit about 10mm long, berry-like, but structurally a pome containing a single seed. Haws are important for wildlife in winter, particularly thrushes and waxwings; these birds eat the haws and disperse the seeds in their droppings. The common hawthorn is distinguished from the related but less widespread Midland hawthorn (C. laevigata) by its more upright growth, the leaves being deeply lobed, with spreading lobes, and in the flowers having just one style, not two or three. However they are inter-fertile and hybrids occur frequently; they are only entirely distinct in their more typical forms. Common hawthorn is extensively planted as a hedge plant, especially for agricultural use. Its spines and close branching habit render it effectively stock- and human-proof, with some basic maintenance. The traditional practice of hedge laying is most commonly practised with this species. It is a good fire wood which burns with a good heat and little smoke. 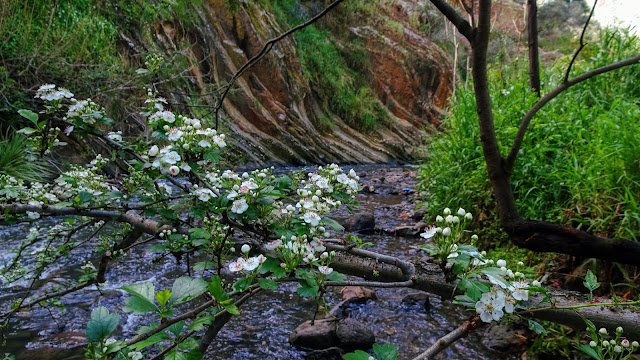 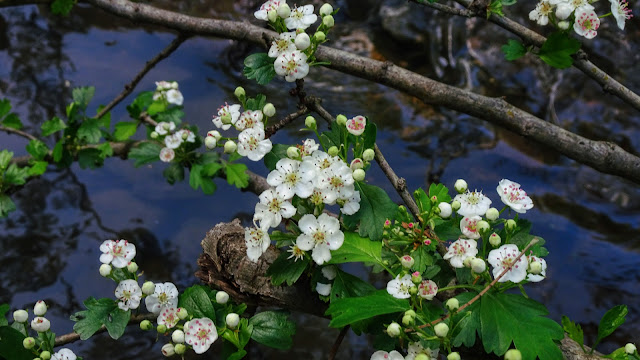 Posted by Melbourne Australia Photos at 18:11