Terraced houses in Australia refers almost exclusively to Victorian and Edwardian era terraced houses or replicas, almost always found in the older, inner city areas of the major cities, mainly Sydney and Melbourne. Terraced housing was introduced to Australia in the 19th century. Their architectural work was based on those in London and Paris, which had the style a century earlier. Large numbers of terraced houses were built in the inner suburbs of large Australian cities, particularly Sydney and Melbourne, mainly between the 1850s and the 1890s. The beginning of this period coincided with a population boom caused by the Victorian and New South Wales Gold Rushes of the 1850s and finished with an economic depression in the early 1890s. Detached housing became the popular style of housing in Australia following Federation in 1901.

The generic Melbourne style of terrace is distinguishable from other regional variations, often reflecting the popularity of Italianate villa architecture in the city.  Many Victorian era Melbourne terraces are built on foundations of bluestone, a solid and porous local rock quarried from the volcanic plains to the north and west of the city, although it is rare to find terraces completely constructed of the material due to the difficulty to mould it.  The majority of designers of Victorian terraces in Melbourne made an effort to deliberately hide roof elements with the use of a decorative parapet, often combined with the use balustrades above a subtle but clearly defined eave cornice and a frieze which was either plain or decorated with a row of brackets (and sometimes additional patterned bas-relief. Chimneys were often tall, visible above the parapet and elaborately Italianate in style. 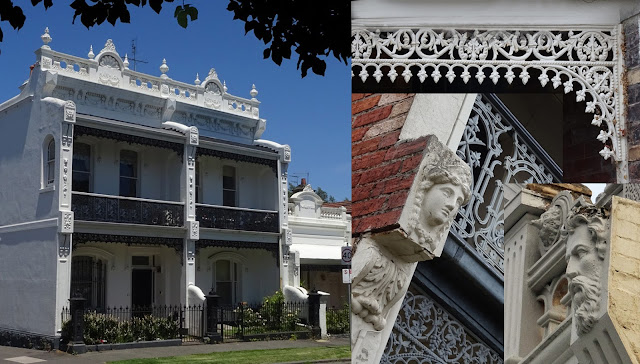 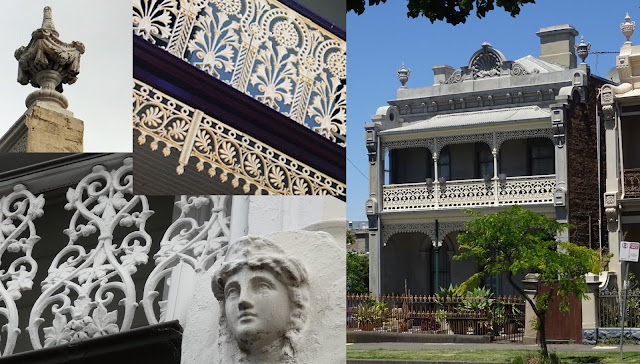 Posted by Melbourne Australia Photos at 18:58