Myer is Australia's largest department store chain, retailing a broad range of merchandise including women's, men's and children's clothing, footwear and accessories; cosmetics and fragrance; homewares; electrical; furniture and bedding; toys; books and stationery; food and confectionery; and travel goods. The Myer retail group was started by Sidney Myer, who migrated from Russia to Melbourne in 1899 with very little money and little knowledge of English to join his elder brother, Elcon Myer (1875-1938), who had left Russia two years earlier. They opened the first Myer store in Bendigo, Victoria in 1900. After prospering, the second store opened in 1908. In 1911 Myer purchased the business of Wright and Neil, Drapers, in Bourke Street, Melbourne, near the General Post Office, and a new building was completed and opened in 1914. From this base in Melbourne, Myer built Australia's largest chain of department stores, and the only chain with stores in all Australian states.

In June 2007, a consortium comprising the Myer family, Colonial First State and GIC Real Estate (Singapore) announced it would be purchasing Myer's Melbourne CBD store. The Bourke Street part of the store was planned to be redeveloped by 2009, with Myer taking a 60-year lease, but the development was not completed until March 2011. The Lonsdale Street part of the store closed in 2009. Here one can see the newly refurbished and renovated Bourke St store on the sixth level that houses electronics, DVDs, CDs, cameras, etc.

This post is part of the Mellow Yellow Monday meme. 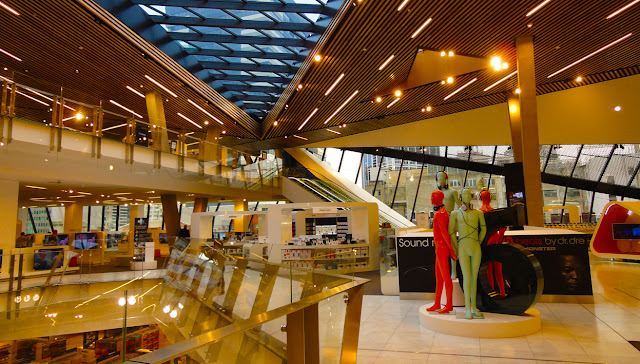 Posted by Melbourne Australia Photos at 04:40