A beautiful tree found planted on many a nature strip and garden in Melbourne is Acacia baileyana (Cootamundra Wattle), which is the floral emblem of the small rural township of Cootamundra which is located on the western slopes of New South Wales, about 350 km southwest of Sydney.


Cootamundra Wattle is a well-known Australian species, principally on account of its popularity in cultivation (both within Australia and abroad). In 1986 its profile was enhanced following the release of John Williamson’s song "Cootamundra Wattle". The species is featured on an Australian stamp and appears in many popular and scientific publications, for example, Archibald Campbell’s book Golden Wattle which was published in 1921.


Acacia baileyana was originally described by Baron von Mueller in 1888, based on a plant cultivated in 1876 at Bowen Park, Brisbane, by the Queensland botanist, Frederick Manson Bailey (after whom the species was named). Acacia baileyana has a very restricted natural distribution which is confined to the vicinity of Cootamundra, hence its common name. In its native habitat the species is found in sheltered situations, generally on elevated sites, between Stockinbingal, Temora, Cootamundra and Bethungra (a distance of only about 50 km, east to west).


Here it is seen growing along a bicycle path in Darebin Parklands, an extensive natural reserve along Darebin Creek, about 15 minutes walk from our home.


This post is part of the Floral Friday Fotos meme. 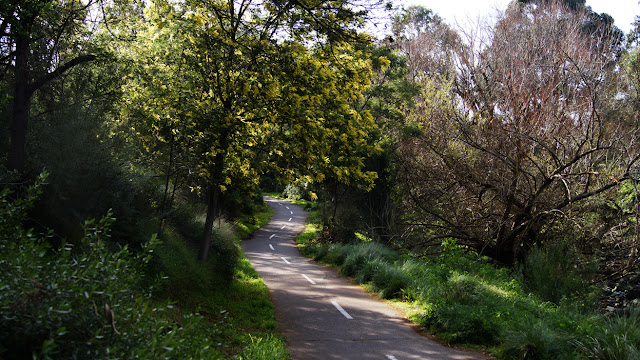 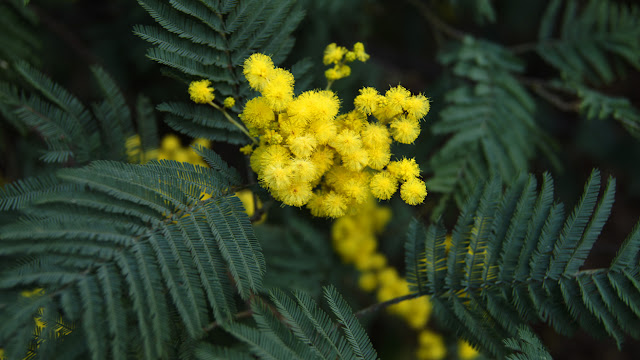 Posted by Melbourne Australia Photos at 04:52