This is the former English, Scottish & Australian Bank (now ANZ ‘Gothic Bank’) at 382-392 Collins Street (north-east corner of Collins and Queen Streets). This edifice is considered to be the finest secular Gothic Revival building in Australia. It was erected as the head office of the ES&A Bank in 1883-87. The top two floors were the residence of George Verdon, general manager of the bank, and an enlightened patron, who commissioned noted architect William Wardell, and together they created this masterpiece. The flat stone exterior is punctuated by delicately elaborated openings, those of the first floor porches in Venetian Gothic tracery.
Inside, the banking chamber is a tour-de-force of rich Gothic imagery and 19th century technology – the columns, ribbing and sculptural capitals are all made of iron. Verdon’s residence above remains substantially intact (also lavishly ornamented), and was occupied by the women only Lyceum Club in the 1920s. The bank expanded in 1922 to occupy the adjacent buildings on both streets, and the banking chamber was seamlessly extended into the former Stock Exchange.
The building's history proves the possibilities of heritage conservation coexisting with progress. In the 1920s ES&A extended the banking chamber eastwards into the adjoining Stock Exchange and Safe Deposit Building. This L-shaped structure (built 1889-91 and designed by William Pitt) had frontages to Collins and Queen streets. Its magnificent public hall, now known as the Cathedral Room, was incorporated into the banking chamber in 1950. ES&A's successor, Australia & New Zealand Banking Group Ltd, undertook restoration and redevelopment of the site in 1990-93, when a modern office tower was built at the rear (near Little Collins Street) and connected to the other buildings by a glass-roofed atrium.
This post is part of the Mellow Yellow Monday meme. 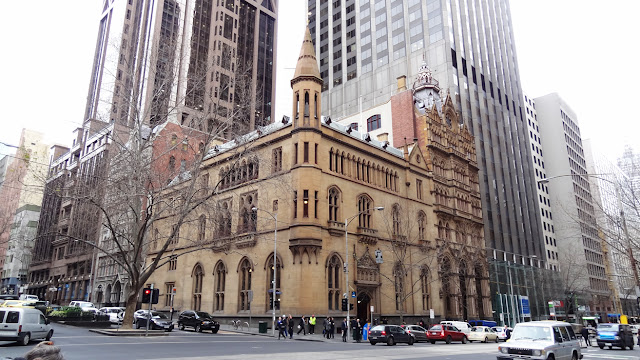 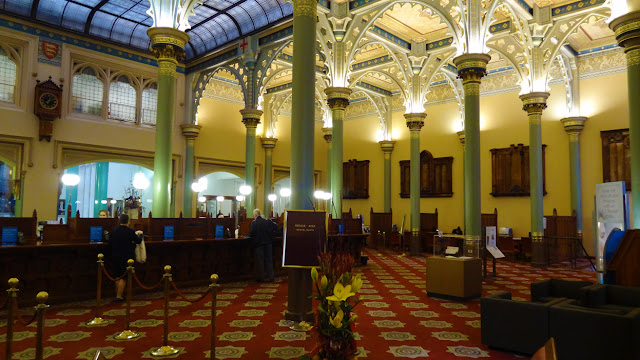 Posted by Melbourne Australia Photos at 02:29