Lagunaria is a monotypic genus in the family Malvaceae. It is an Australian plant endemic to Lord Howe Island, Norfolk Island and parts of coastal Queensland. It has been introduced to many parts of the world. The genus was named in honour of Andrés Laguna, a Spanish botanist and a physician to Pope Julius III.  It now consists of the single species Lagunaria patersonia, commonly known as the Pyramid Tree or Norfolk Island Hibiscus. It is not a true Hibiscus, however, but does belong to the same plant family, Malvaceae. These trees are often planted along Melbourne streets and in parks and when in flower can be quite spectacular.

Its seed capsules are filled with irritating hairs giving rise to another common name, Cow Itch Tree. The "cow" part however appears to be a misnomer. In many parts of Australia, Lagunaria is considered a pest, and is commonly referred to as the Itchy Bomb Tree due to the tiny, almost invisible, hairs inside the seed pods which, if the seeds pods are split open, can lodge in the skin like tiny barbs of broken glass, causing a great deal of pain. 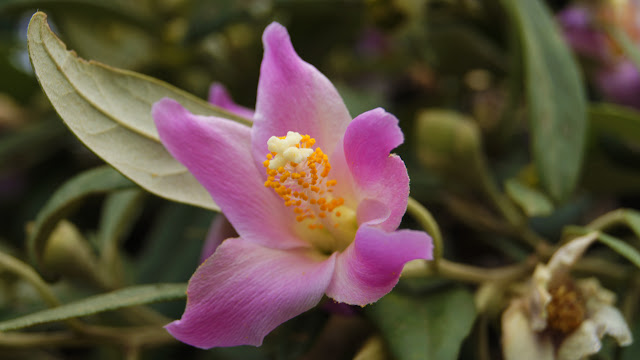 Posted by Melbourne Australia Photos at 04:02