The stained glass processional doors provide a wonderful light filled entry to St Paul's Anglican Cathedral in the City. Reflecting Butterfield’s gothic revival architecture, the stained glass of modern master Janusz Kuzbicki is visually lightweight, transparent and contemporary in design but with respect and appropriately sympathetic to the original style of the building's ambience.
The panel tells the story of St Paul at the moment when he is blinded by light on the road to  Damascus; traditional iconographic symbols of the four Gospel writers, drawn from the vision of  Ezekiel can be seen the Lion (St Mark), the Eagle (St John), the Ox (St Luke) and the angel (Matthew). Construction and installation were made possible by a generous donations from The Sidney Myer Fund and individual members of the Myer family.
Allowing a new brightness into the interior of the Cathedral, the doors can be seen as “symbolic of St Paul himself, who broke down the barriers  between people and the Gospel, making  Christianity accessible”. The doors are constructed of 25mm cast glass in the dalle de verre method, set into a steel frame. Janusz Kuzbicki has received many major commissions as an artist and sculptor, including the monumental sculptural Gates to the Chapel of theAscension in St Paul’s, the marble altar in St Patrick’s, Melbourne and in St George’s Chapel, Windsor Castle.
The stained glass processional doors allow the great wooden doors of the Cathedral to remain open and welcoming. These beautiful, light filled doors provide protection from the weather and the city noise, as well as filling the entry with the wonderful colours of the light through the stained glass. 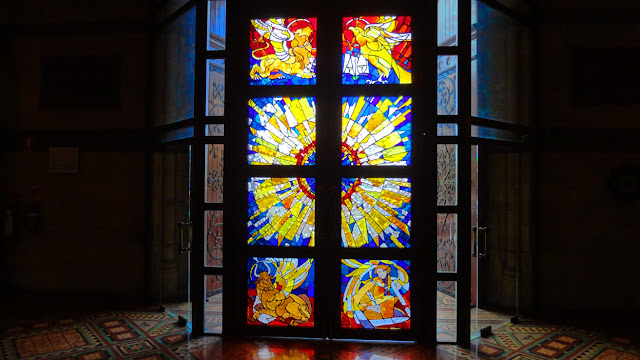 This post is part of the Psalm Sunday meme. Below is one of the most famous settings of Psalm 51. "Miserere", by Italian composer Gregorio Allegri (1582-1652), is a setting of Psalm 51 composed during the reign of Pope Urban VIII, probably during the 1630s, for use in the Sistine Chapel during matins as part of the exclusive Tenebrae service on Wednesday and Friday of Holy Week. It was the last of twelve misereres composed and chanted at the service since 1514 and the most popular: at some point, it became forbidden to transcribe the music and it was only allowed to be performed at those particular services, adding to the mystery surrounding it. Writing it down or performing it elsewhere was punishable by excommunication.
Posted by Melbourne Australia Photos at 05:59