IN ROYAL ARCADE - "ON SALE"

Royal Arcade is a heritage shopping arcade in the City of Melbourne.  Originally constructed in 1869, the arcade connects Little Collins Street to the Bourke Street Mall, with a perpendicular passage running to Elizabeth Street in the west. It also connects to the smaller Hub Arcade near the Little Collins Street end. Originally designed by Charles Webb, the arcade features a high glass roof and windowed stores. At the south end, the arcade features effigies of mythical figures Gog and Magog and a clock which chimes each hour. The arcade was restored between 2002-04 which resulted in additional natural light and consistency of the shopfronts. It is a magnificent Victorian era arcade, listed on the Victorian Heritage Register. In addition, Melbourne's Golden Mile heritage walk runs through the arcade. Along with Melbourne's other arcade, the Block Arcade, and Melbourne's lanes, it is a tourist icon of the city. Royal Arcade is famous for its fashion stores as well as specialty stores such as tarot card reading store and quirky fashion boutiques, jewellery shops, cafés and luxury goods shops.

This post is an entry in the Signs, Signs meme. 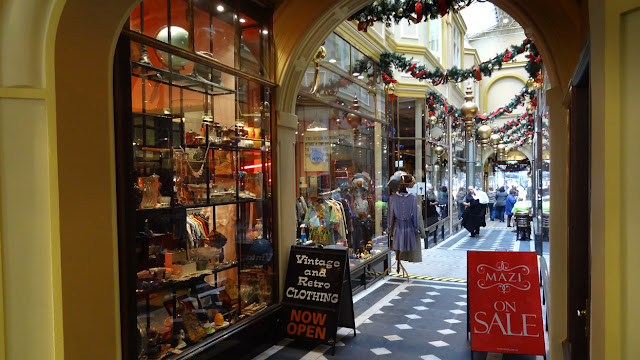 Do you like photographing flowers? Join me on Friday for the Floral Friday Fotos meme!
Posted by Melbourne Australia Photos at 14:20