The State Library of Victoria is the central library of the state of Victoria, Australia, located in Melbourne. It is on the block bounded by Swanston, La Trobe, Russell, and Little Lonsdale streets, in the northern centre of the central business district. The library holds over 2 million books and 16,000 serials, including the diaries of the city's founders, John Batman and John Pascoe Fawkner, and the folios of Captain James Cook.
The landmark Domed Reading Room, which opened in 1913 was designed by Norman G. Peebles. Its octagonal space was designed to hold over a million books and up to 500 readers. It is 34.75 m in both diameter and height, and its oculus is nearly 5 m wide. The dome was the largest of its type in the world on completion. 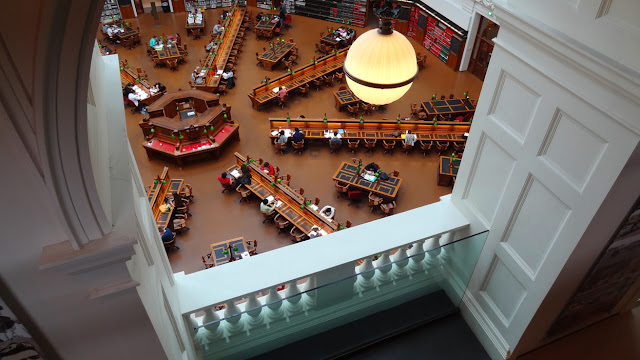 Posted by Melbourne Australia Photos at 09:01